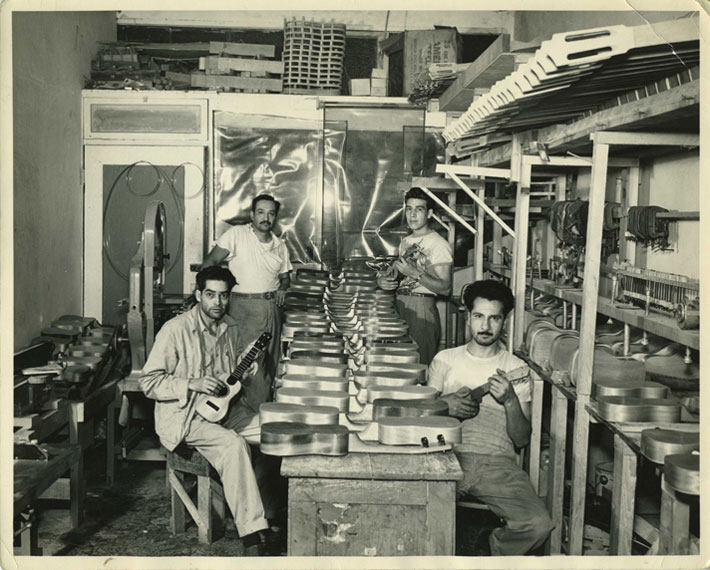 The Delgado story really begins in the early 1900’s in Torreón, México, in the state of Coahuila.

Manuel’s Great-Uncle, Candelario Delgado Flores (Candelas), born in 1911, and his Grandfather Porfirio Delgado Flores (Pilo), born in 1913, began with different careers. Pilo was a cabinet-maker, and Candelas was a singer/guitarist. The brothers joined forces and began building guitars in their home. They soon organized a Cuban-style band called “Son Torreón,” for whom the Delgado brothers made all of the instruments. Manuel’s Great-uncle, Candelas is credited for making the first “cut-away” guitar for their band.

The band and guitar-making continued, and a shop was rented on Xavier Mina Street in Torreón. Soon, the repair business grew. Most of the guitars in Mexico at that time came from Spain, and their closest local competitor was 800 miles away in Aguas Calientes. Before too long, the brothers’ hard work built a thriving business.

In 1937, both brothers decided to relocate to Juárez, Mexico. They operated the shop together until 1945 when Candelas went to El Paso to work for the defense industry.

Candelas, in his many years of marriage, had never sired any offspring. However, his younger brother, Pilo had five children – four daughters and a son named after his brother. Candelario “Candelitas” Delgado was born March 1, 1944. Candelario, Manuel’s father, represented the second-generation luthier.

Pilo continued to operate the shop in Juárez until the end of World War II when Candelas opened his own store in El Paso, Texas in 1946. But the demand for their work was great in Los Angeles. So in 1948, Pilo and Candelas opened their first shop at 2718 Brooklyn Avenue, Los Angeles, California. They continued to import guitars from Juárez and El Paso and made fine guitars in their shop.

In 1950, the brothers opened a new shop at 1066 Sunset Blvd that remained open for over 30 years. During that period, instruments were made for many famous artists.

Candelas, “Candelitas”, married in 1967 to Marta Loredo and started a family. Together they had three children – Monica, Thomas, and Manuel. 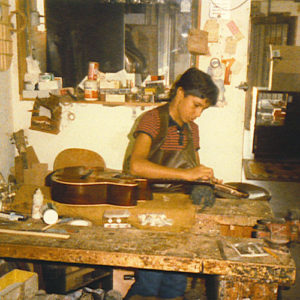 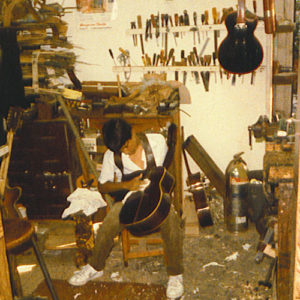 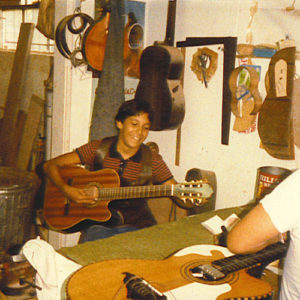 Manuel loved to spend time with his father and learned to fix anything from wood projects to damaged electronic devices that the neighboring shop-keepers would throw in the dumpster! Manuel’s father built his first guitar at age 14. When Manuel was 12, he set out to beat his father’s record. Manuel succeeded, completing his first guitar by age 12, two years younger than his father’s first build.

After the death of Manuel’s Great-Uncle, Candelario “Candelas” Delgado in 1985, Pilo and his son Candelas continued the business for some time. Eventually, the young Candelas took over the business and brought it to new heights.

As Manuel grew up, he spent more time at the shop working beside his father. After school and throughout summers during middle school and high school, Manuel spent many hours learning the fine points of building guitars and perfecting his technique. He worked full time while tending to his studies in college.

After 9/11, Manuel designed and built, “The Unity Guitar,” created to raise money for the undocumented victims of 9/11. Manuel sought out artists from all styles of music to support the project. The goal was to represent unity, in not only the woods from around the world that were used to make it, but in the artists as well. Manuel’s guitar raised over $40,000.

Early in 2005, Manuel moved to “Music City, USA,” the city of Nashville, Tennessee, to continue following his family’s tradition. Manuel now has a shop of his own. Here he creates high-end Concert Classical guitars, Flamenco guitars, steel-string acoustic, Resophonics, bajo sextos/quintos, requintos románticos, requintos jarochos, jaranas, Cuban tres, guitarrones, and vihuelas – many of the traditional instruments he grew up around.

In 2018, Manuel’s oldest daughter, Ava Canción Delgado, crushed both his record and his father’s by finishing her first instrument just one month after turning 10. Manuel couldn’t be prouder.

Manuel is committed to build fine instruments with the integrity and respect of the Delgado family’s tradition.

Founded in 1928 by Porfirio & Candelario Delgado, Delgado Guitars is backed with over 90 years of industry experience.

Delgado Guitars provides top-notch handmade instruments of the highest quality, custom built for each client. Along with great customer support, it’s a combination that can’t be beat!

Through our commitment, experience, and expertise, Delgado Guitars has established a business relationship with its customers that will last a lifetime!

I decided to return to the guitar at age 56 after recovering from a heart transplant. I wanted a single instrument that would last a life time. What I received from Manuel was a work of art that has a beautiful voice and a soul as well.

I have played with lots of different guitars and grew up in a family of Greek musicians. The one thing I noticed immediately with Delgado guitars is that It had an authentic spirit. I got excited again for the first time in years to hold and play a guitar. The love put into the instruments built gives me the feeling that it has a heartbeat of It’s own. I look forward to writing my songs through it.

A Message from Manuel

“I hear the title “Luthier” being used all the time by today’s guitar makers, yet I wonder how many of them truly understand its meaning.

For me, it not only represents my life, but the sacrifices my grandfather and father made to preserve the craft. I build guitars because I breath, and as long as God blesses me with the ability to continue creating music, this is what I plan to do. My faith in God and my appreciation of my father, grandfather, and great-uncle are what motivate me. The loved ones who are still with me are what inspire me, but the integrity of building truly handmade instruments to offer to those who have a love for music is what obligates me to my craft.

I am a Luthier. I don’t say that boasting or out of pride, but out of respect. Respect for those men who honored the craft before me and the few men and women that still honor it today.”